Woman of the Year in Tech – Ada Lovelace Award 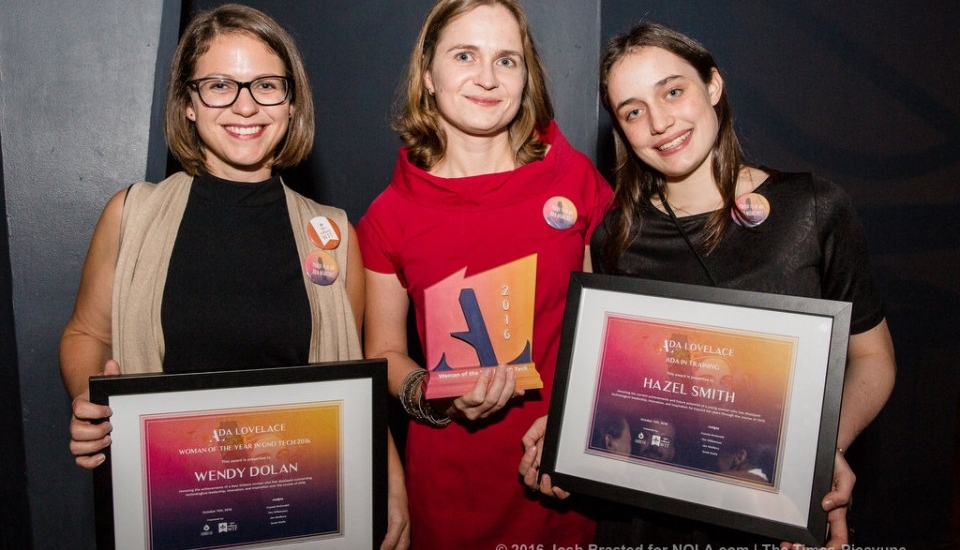 Get Online NOLA is proud to announce that our founder, Wendy Dolan, was named runner up for the GNO Woman of the Year in Tech award. Wendy was in very good company, with the grand prize going to Dr. Anastasia Kurdia,  Professor of Practice in Computer Science at Tulane University, and accomplished software engineer.  Jacqui Nelson, a developer and passionate advocate for inclusion in the tech community, was also named as a runner up, and the “Ada in Training” award went to Hazel Smith, recent Electric Girls graduate and peer educator.

Sponsored by New Orleans software studio, LookFar, the Ada Lovelace Award “honors the work that female innovators do in our technological ecosystem by recognizing one outstanding nominee as Woman of the Year in Tech in Greater New Orleans.” The award shines a light on women who innovate, lead and inspire in the field of technology. Over 44 local women were nominated for the 2016 awards. Read about all the nominees here.

The award ceremony was held on October 12, 2016 at Eiffel Society in Uptown New Orleans. View the photo gallery from the event on Nola.com.

Born in 1815 into the English aristocracy, Ada Lovelace was a writer and mathematician, best known for her work on the first computer, Charles Babbage’s analytical engine. Her notes included the first algorithm intended to be carried out by a machine. She is widely regarded as the world’s first computer programmer, and she envisioned a world  in which computers would become a major part of day to day life.

Wendy’s Speech from the Woman of the Year in Tech awards:

What an honor to be in a room with so many women who do so much, not only for the tech industry,  but for the city of New Orleans in general. First, I want to thank LookFar for shining a light on women who lead, inspire and innovate in technology. And thanks as well for inviting New Orleans Women in Technology to be a partner in this great event. A lot of you area already involved in WIT, but I’ve spoken to many of you who aren’t, and wanted to give you a little history behind our organization.

New Orleans WIT was founded only a few years ago, in 2013, by an amazing woman named Torrie Adams. Torrie moved here from Baltimore, and started looking for a group of female peers in technology. When she didn’t find that group, she decided to create one, ’cause she’s badass like that! And Torrie is all-in on this movement. In fact, she recently left New Orleans to lead a diversity hiring program for Google, so w’re very proud of our founder. Torrie’s vision, and the mission of our organization, is to increase the industry landscape for women in tech in New Orleans. We do this through networking, through events like this one, through discussions  and panels about issues facing women in the workplace, and most importantly, through workshops that teach practical skills to both men and women. Our workshops teach real world skills that people can use to increase their salary or enter the tech field. Our first workshop of this programming year is a two part HTML/CSS workshop sponsored by local software company, Lucid.  I want to congratulate Lucid, because they approached us about this workshop. They decided that they wanted to help educate not only their staff, but the New Orleans public about the basics of coding.

As you can imagine, we think a lot about why it’s important to promote technological education to women in particular. One of the main reasons is that women are users of tech, as much as if not more so than men. I know all of you ladies have smartphones in your handbags tonight and are on at least two social media channels. But we are not just consumers of tech. As a programmer myself, I know that we have the aptitude and the skills to be creators of technology products. But more importantly, we need to remember that ground-breaking technology products are not made of just code and science alone. Great technology is made by exceptional teams, and those teams involve planning, design, business management, human resources, and more. Ya know, I find it strange that when a woman orchestrates the construction of a huge skyscraper in the CBD – she won’t be wielding a hammer – but there’s no doubt in my mind that we’ll call her a “woman in construction.” So why is it that women who build tech but don’t necessarily write the code aren’t attributed with the title “woman in tech.” I think it’s time to change that.

But why now?  Well, a lot of you may have read the article that circulated around social media a coupe months back about the Oregon Trail Generation. And let me tell you, I identify as a member of that generation. I could hitch up my oxen in the computer lab with the best of ’em. The article pointed out that people in my age group, mid to late 30s, were the first generation to live in both a digital and analog world. We started our school careers researching term papers in card catalogues, and ended them researching in online databases. We started off using pay phones, those of us who were “cool” enough got to use bag phones, and now we are just as attached to our iPhones as any millennial. Well that article really made me think about just how young the digital word really is. We are experiencing the infancy of the digital world, and it is our responsibility as women to make sure that we have a part in building the infrastructure of that world. There were lots of reasons, from pure physiology, to systemic discrimination, that women weren’t necessarily involved in planning the infrastructure of the physical world. But there is no reason that women can not have a major part in planning and building the new digital world. We have the brainpower, the aptitude, and the access to do this. I commend all of you here tonight for the work you’re already doing  and I welcome you to volunteer with WIT to help continue our mission and to inspire, lead, and innovate – for all of us, and especially for the next generation of women in technology.